I guess this will be my first official update on the blog since I moved it. This is going to be a bunch of tiny articles because I have had a ton of stuff I wanted to post, but I never got around to it. This will also be by far my most picture intensive blog thus far; which is pretty cool. I think the pictures add more to the blog than just text.

I was on my way to pick up my new bike in Illinois (it’s so awesome) and I ran into this fantastic sight. I can only hope that somewhere on the back of one of those vehicles there is a save the rain forest bumper sticker. 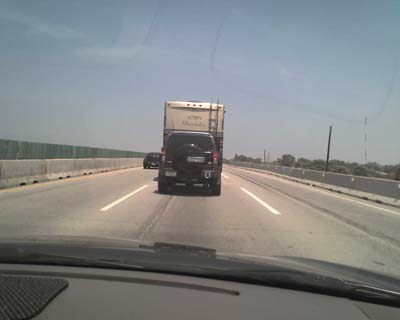 Yesterday I spent the entire day watching a series I really should have watched prior to now. If the title didn’t tip you off it’s Firefly. It really got shafted by FOX, which if you think back only a little they have done to quite a few other shows. I am still bitter about Andy Richter Controls the Universe. The show had some really good writing and a very compelling story. The problem was if you didn’t have the back story it was hard to follow. I couldn’t see jumping into it in the middle and thinking it was any good at all. The basic premise of Firefly is a space western. I know that sounds quite weird, but it works. It doesn’t have any aliens, it’s just humans at the far reaches of space. You follow a crew of misfits all who have their own pasts. The captain, Mal, and his first mate, Zoe, are ex-army buddies who fought on the loosing side of a civil war. Basically the universe is controlled by two combined superpowers, The United States and China, called the Alliance. The cool part about that is everyone speaks English and Cantonese. All the swearing is done is Chinese which is a neat idea to me. The show is also littered with Kanji which me, being a student of Japanese, is quite entertaining to me. Each episode pretty much has a standard formula; small into, plant to thieve and/or sell thieved goods, things go ary, get caught, bust out. As predictable as it is, the cool part to me is how they go about getting unstuck from the sticky situations. If you like sci-fi at all I would have to recommend this series, because even thought it is only 14 episodes long, it is well worth it. FOX made a big mistake letting this one go.

This caught my eye when I was watching an Episode of Firefly. 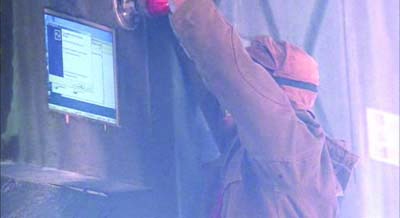 I guess in the Future people are still using Windows XP.

This picture I stole off Digg. I found it quite humorous. It was taken in the Vatican. I guess the Catholics have their IT department together. 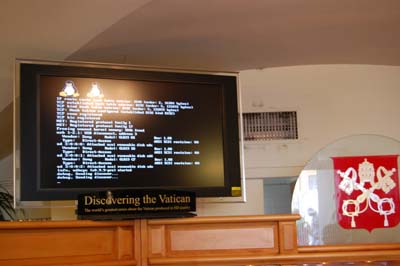 Oh, Those Koreans or My Ignorance

Aaron and I went over to Gaza last night for some delicious Korean food. We get our menus and whilst I was looking through to see what I was going to partake of this evening I came across their “Hot Pots.” I noticed that each entree came in “flagrant broth.” Maybe that is correct and I am naive, but I couldn’t help but chuckle at the sight of it. Actually, while I am writing this I went over to Webster to check the definition to Ctrl+C it over here and I guess the Archaic definition of flagrant is fiery hot. I guess that makes me the butt of this joke. Anyways, it is still funny to read it with the common definition of the word; so obviously inconsistent with what is right or proper as to appear to be a flouting of law or morality. Hehe.

I know this makes me kind of slow on the scene for this, but I just got Gears of War for Xbox 360. If there was ever a game to put hair on your chest it would definitely be this one. It is so testosterone filled sometimes it to the point of ridiculous. You play the role of Marcus Fenix who was imprisoned for some reason and then released to help fight a war against a horde of nasty bug things called the Locust. Every character looks like he has been on steroid therapy for the past year and a half in addition to the giant guns they tote. The standard issue rifle you are issued has a pretty distinctive feature on the end, a chainsaw bayonet. Let me repeat A. Chainsaw. Bayonet. That is just plain awesome. You can perform “executions” when you get close to enemies with the chain saw and you cut through them like a hot knife through warm butter all while blood is splashed across the screen. It may seem like a little much, but it is quite satisfying to saw enemies in half. When you knock down an enemy and they are not dead, but can’t move you can actually curb stomp them. Again quite satisfying. This is not to say I am some blood thirsty psychopath, it is just stress revealing. Also this game is TOUGH, not just your normal brand of shooter. As beefy as you are as a main character you are not immortal. You can’t just go John Rambo in there and start shooting, you have to take cover and plan everything out. It is quite frustrating because you end up playing the same damn parts over and over again. Your teammates are basically big muscle heads with targets on their foreheads. I guess they didn’t get the memo that the game is more strategy based because they just run out in front of you and get Swiss cheesed then complain that they are loosing blood and need you to resuscitate them. Overall though the game is shaping up to be really fun and also harder as time goes on.

My roommate is really into digital audio and thus I hear quite a bit about it. He is working on a project involving the NES audio chip the 2A03. It is actually an awesome idea and I am excited to see (or hear) the final product. Through his research he discovered and thus explained to me that the Japanese version of the NES named the Famicom (short for Family Computer) has a pin that would allow game developers to add their own sound chips to games. This feature I guess was never used because when they released the NES in America the pin was not a feature. In later years developers took advantage of this and released games that would have extra sound channels and such. It made all the music sound much more robust. One example of this was the VRC6 by Konami. They only used it in a few games, but when they hit American shores they had to tone down all the music because of the lack of the ability to use extra chips. It might not seem like a big deal, but it really does hinder the tunes. Here are MP3’s of Castlevania 3, one with the VRC6 and one without. Listen for yourself.

Castlevania 3 US (without VRC6)

As you can hear there is quite a difference in quality. The VRC6 game 3 extra channels to the NES (two square waves and one sawtooth wave). Near the end of development Konami created the VRC7 which was an entire FM synthesizer on a chip. The resulting sounds absolutely blew away anything on the Famicom. It rivaled the Genesis in quality. This makes sense because the Genesis used an FM synth to create it’s music. The only game to use the VRC7 was Lagrange Point. Here is a sample from it.

Pretty impressive if you ask me. All the Engineers back then had the limitations of hardware so it really took some creative ideas to push what they did out of the NES. Mapper chips and the like. I really would like to give hats off to the coders and engineers from then because they really did an amazing job with the system.

About 2 weeks ago I saw a trailer for Hellboy II: The Golden Army. It looks pretty good, but I had not seen the first one. I asked around to see if any of my friends have seen it. From the reactions I got it was supposed to be pretty good. I acquired a copy of it and decided to give it a shot. I was a fan of Del Toro from his film Pan’s Labyrinth and he directed Hellboy and Hellboy 2 so I already had some faith in the movie. I was pretty happy with the first one. It was action packed and had a hint of Religion to it. The costumes Del Toro uses are absolutely stunning, quite impressive. The movie didn’t knock my socks off , but was above average in terms of films so I was ready to see Hellboy 2.

Hellboy 2 I was actually very impressed with. It was much more cohesive than the first one which didn’t even seem to have a plot besides follow Hellboy. The story gave the characters more depth as Hellboy struggles with his identity as the son of Satan. The costumes were more plentiful and again insanely detailed and imaginative. The movie seemed like it used less CG than the first one or maybe it was just more improved. Either way it wasn’t as apparent. I also loved the mix of fantasy and religion. It is almost unheard of to mix those two worlds even though to me they are pretty much the same thing. It was a breath of fresh air. They might not be the best of the best when it comes to comic to movie adaptation. I never read the Hellboy comics, but it was a pretty solid flick. Check them out, even if it’s not your cup of tea it won’t be a waste of time.

It was announced a few weeks back that the rumors were true and that Capcom was indeed making a Mega Man 9. I am just about the biggest Mega Man fan you will ever meet and so this had me pretty excited already. There was speculation that Capcom might make a 16-bit or 8-bit revival of the series, but it was all speculation. Then they released this trailer. 8-BIT MEGA MAN IS BACK! That trailer is basically porn to me. 8-bit Mega Man was a large part of my childhood, definitely my favorite games as a kid. This will complete the Mega Man series as the X series followed that. It is being released for Wii, PS3, and Xbox 360 so there is no excuse for anyone who owns a modern system not to buy this. Anyway, here is the trailer (drool).

I have probably watched this 10+ times already.

This is all I wanted to post, I think. I will try to keep my posts more frequent. I enjoy comments so please post them. Tell me your thoughts on any of these topics. I am hoping for the best from Serenity, the Firefly movie, I will be watching it tonight. I am also going to be posting the Track of the Week again soon, so keep an eye out.

2 replies on “Amalgamate of Doom”

Was researching the VRC6 chip and stumbled on this page. I’m interested to see what your roommate can come up with! I’d love to be able to see the NES be able to play the real Akumajyou Densetsu 🙂

[…] project was modifying my American NES to play audio from enhanced Japanese Famicom carts. I had a previous post explaining the whole thing. Here’s a Cliffs Notes of the whole thing. In Japan, on the […]