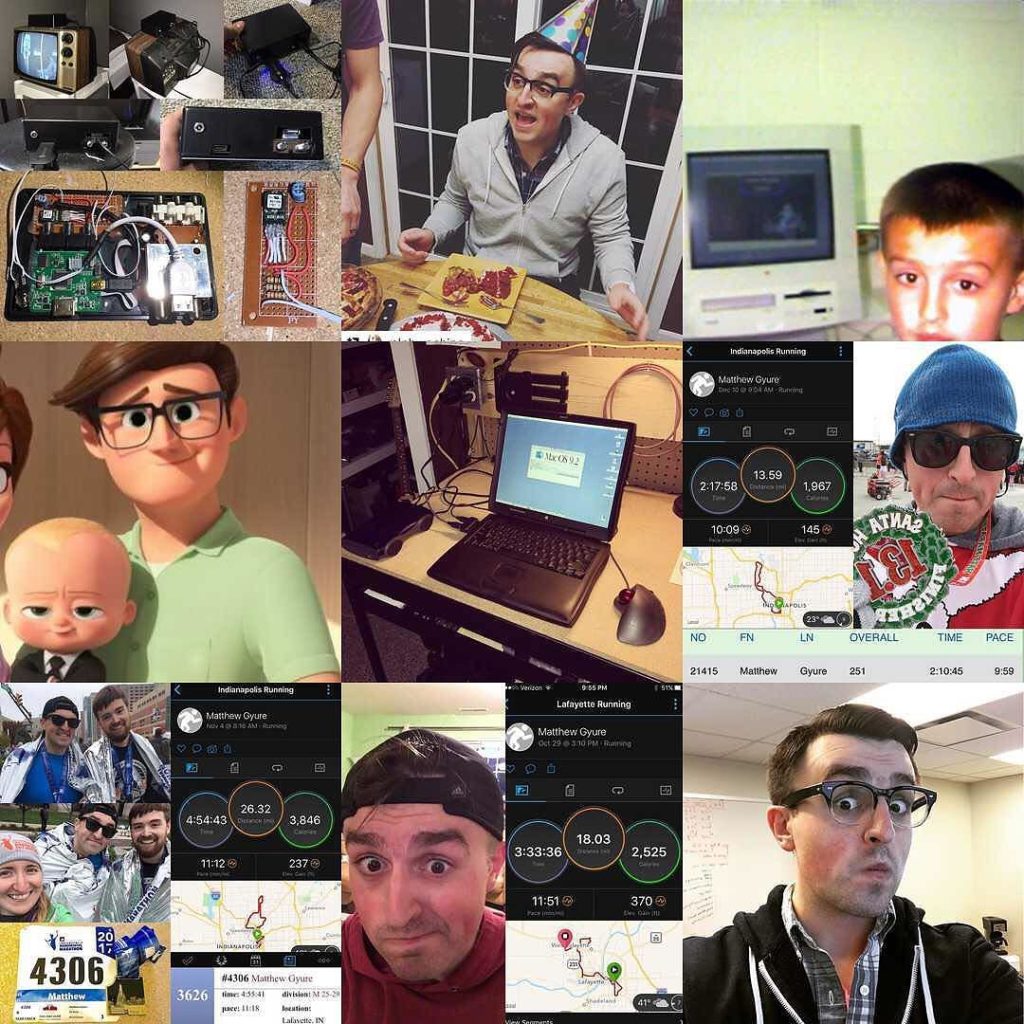 I’m trying to look back on what 2017 even was. It’s feels like one of those old flashbulbs going off. It was bright, intense, painful, and then it was over.

I’m fairly uncool and try to theme my years. The narrative I gave to 2017 was “Go Hard.” What does that mean? Well, I’ve been trying to recapture this lightning in a bottle I had during college. Not the bad first and middle parts, but the explosive end. I probably romanticized (read: definitely) this part of my life, but I felt so much forward momentum. I felt like I was growing, learning, changing. There is truth to this. The issue is when life started to settle down, I realized how tired I was. I had worked too hard and I needed a break. By 2017, I had been “taking a break” for two years going on three and it was showing. I filled my life with other goals, but not the same intensity I had before. The “Go Hard” motif was about trying to recapture that magic, and get back to accomplishing goals.
But, any major plans I had for 2017 were put on hold, not necessarily by choice, but by circumstance. I won’t rehash what I’ve already said before, but the 2016 election changed quite a few things for me.

The emotion that dominated the start of 2017 was anxiety. I was more on edge during that first part of the year than in any point in recent memory. For instance, shortly after the inauguration some friends and I got together to hang out and play Secret Hitler (which is just a fantastic game, by the by) and due to the subject matter, I remember being nervous and shaken by the outcome of each round. In my head, this game was a proxy for the current political situation. I assure you my behavior was not contained solely to the recesses of my mind. I played the game again recently with many of the same people and they recalled my previous demeanor. There were parts of this time where I felt utterly at the mercy of my obsessive emotions and incapable of doing anything about it. I felt immobilized. I did, slowly, find ways to mitigate this though. Primarily through finding actionable ways to try to change the situation, again, see post above.

This newfound political group did add quite a bit of work to my list though. Some of it is self-imposed, some of it is because it needed to get done. Surprisingly though this is probably what actually got me back into a frame of mind with work similar to that I had in college. I felt busier this year than I have in any other time since 2014. I consider this a good thing. I’m healthy and (relatively) full of energy now, so why not use it?
To put the Indivisible stuff to bed here is a small list of things we managed to do in 2017:

* Recruited new members
* Registered new voters
* Made a website
* Got in touch with other Indivisible groups in and out of the state
* Held and attended protests
* Attended street fairs
* Branded
* Got merch (T-Shirts, stickers, business cards)
* Met all Dem candidates running for our district
* Connected with the local parties
* Phone banked for the Virginia elections
* Called our MOC too many times to count
* Got invited to be in a pilot program for fundraising for Indivisible national
* Incorporated as a 501c4 non-profit
* Got our first donation!
* And, personally, learned WAY too much about parliamentary procedure.

Not bad for year one.

As you can probably glean from that list, that is where a majority of my time ended up. I never intended it to, but it was just a lightning rod for all my panic. That means that many of my other goals took a backseat. I never let any of them go, they would just get intermittent bumps of my time. That means, I made progress on almost all of them, but finished hardly any of them. I would explode from one thing to another and drive that goal forward and then let that languish when I found something more interesting to do.

In that sense, my “Go Hard” in 2017, was a success. I went hard for most of the year. Almost always working and doing something, but none of that energy was focused. This doesn’t work with long-term, hard goals and projects. It’s easy to work on things when you are excited it is much harder to do things in the middle, when it’s boring, and a slog, but that is, arguably, the most important part.

That’s why my theme for 2018 is “Make it Happen.” Certainly not going to win any awards for originality, but I think it’s the next step. This year is all about getting back to organization, time management, and grit. I feel I have my work ethic back to where it needs to be. Now it’s all about focus, and drive. 2018 feels demonstrably different than 2017 did. I have all these new responsibilities, but I have a better handle on how and when to deal with them. Not to mention a better handle on my emotional state. I don’t want to feel like anything is solely dominating my time which had been the case. This year is all about attaining those goals, despite the slog, despite the middle. I’m an engineer by training and a programmer by trade so I’m comfortable with systems and frameworks. I want to harness this in 2018 by automating tasks that are huge time sucks, but I still want or need to get done. For instance, Tim and Matt Play is going to be a live show from now on, so I never have to setup, capture, edit, and then upload again. Our million+ fans will be very excited.

There were other things that happened in 2017 though:

I love data, and, like last year, I compiled my exercise history down into this nice little image. 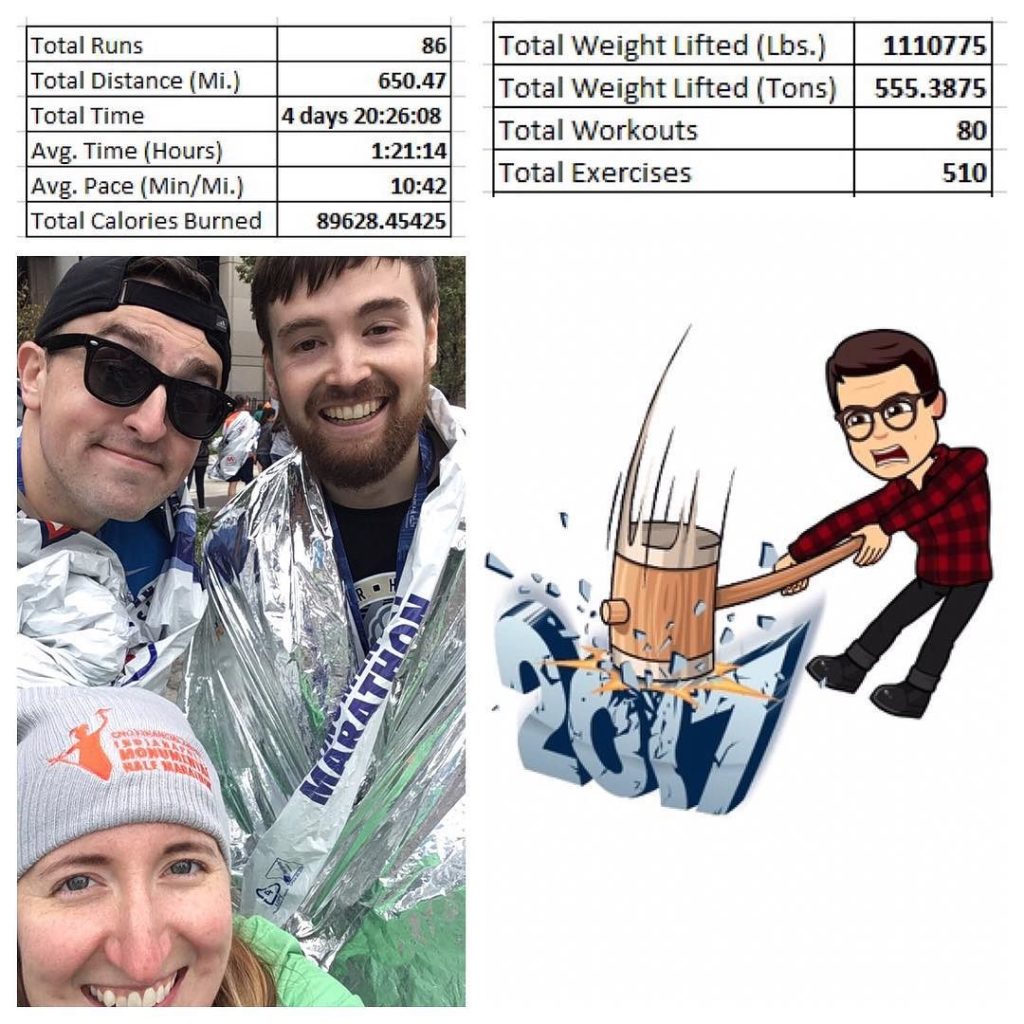 I lifted more than last year, which is apparent when I do certain things these days. I did Yoga X the other day and was able to do some of the balance postures I was never able to do before. I love everything that lifting has done for a more well-rounded fitness, and plan to continue that this year.

One thing that breaks my heart looking at the numbers is that running took a big dip. I felt it, too. I just didn’t devote enough time to it. I want to get back to my 2016 numbers. I had my share of failure and triumph this year with running. Overall, running is something I just love doing, and not setting aside time for it is detrimental to my well-being. Running is as much physical as it is mental. It’s where I think through things and blow off steam. It’s my meditation. So, 2018, more running.

One goal I am attempting is doing a triathlon this year. I’m still going to do marathons, but this seems like a fun, new challenge. I’m garbage at swimming and it seems like a good physical activity for overall fitness.

I’m still doing improv, and if running is how I mentally center myself, improv is where my mind gets to play. My job is fairly analytical, so having this outlet is so nice. As a group, we did so many shows in 2017, and it was super fun. We did end up losing our venue at the end of the year, which sucks, but we are looking. We started and stopped doing long form. And we did a structured show, which was so amazingly fun and different than what we did in the past. Luckily, I recorded the whole thang ding.

We are starting up long form again in about a week and I couldn’t be more excited.

I turned 30(!) and started a video series about my 20s which has been a blast to make. It is the first bit of video content like this I’ve made, and I’m excited to finish the different chapters. I’m learning how to be more candid on camera, and work better with voice over and different camera shots. These videos are all about storytelling which I’ve done only in the most cursory of ways with my previous vlogs. This is forcing me to get better and look at the medium differently. This is by far the most ambitious video project I’ve undertaken, and the most fun. I’m excited to work on and finish this in 2018.

Grad school. These words haunt me. I’ve been talking about this since I graduated and I’m still not in it. 2017 was supposed to be the year. It wasn’t. I took the GRE and did ok, but not to my (or most likely the school’s) satisfaction. I’ve been putting this off for far too long, and it is happening this year. No more excuses, no more procrastinating.

There is something else that happened in 2017. I’m not going get into it here, but needless to say it sucked. Hard.

As I’ve said, 2017 was weird. Lots of highs and lows, and genuine confusion and fear with what to do next. I made it out alive, and if you are reading this, you did, too. I have all these things I want to accomplish in my life, and 2018 is the time to start realizing them. Unlike this post, I need to focus.