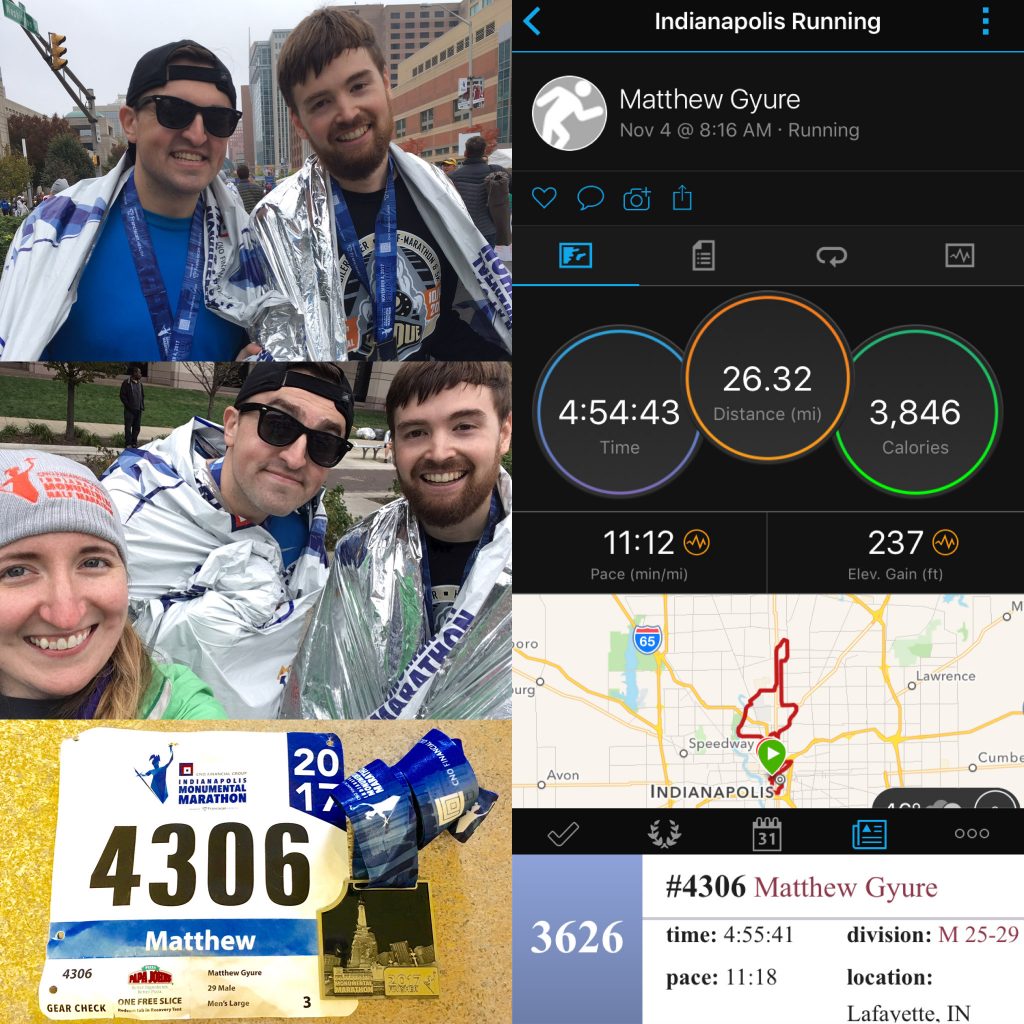 Where we last left our hero (no, not at all), he had a gloomy, black cloud of shame and regret following him around. And now…the dramatic conclusion.

Not to be anticlimactic, but the fact that I did end up doing it is the least interesting part of the story, so now that I got that out of the way, let’s get to the nutmeat of this.

As I said in the previous post, I was incredibly nervous going into this race. To compound my nervousness, I meant to run an 8 miler in the middle of the week to make sure I didn’t get too rusty. On top of motivational problems, there were logistical concerns as well. Daylight saving time hadn’t flipped yet and it was getting dark right after work. I don’t really like running in complete darkness at night. It’s pretty dangerous, and it’s easy to spook people. Dark morning runs don’t bother me as much because there are really only other runners out. Anyway, this is my way of saying I did not get any runs in that week. I was going in cold.

I was glad I was endeavoring to complete this adventure with some friends of mine. It helped take my mind from dwelling on the potential negative outcomes. We headed down on the Friday before the race to pick up our packets, get some food, and get a good night’s rest for the day ahead. We ended up going to a bar chain downtown called The Yard House because it was close and it was near the convention center where our packets were. The only reason I even mention this is because this was a concern of mine. My stomach was the issue in Chicago so I was nervous about eating anything at all. I knew I needed the energy, but I wanted to make sure I digested it in time. I had a vegan burger and a great IPA. Tried to get some good carbs in, but not overdo it.

We got to the hotel, and went to bed pretty much immediately. I definitely did squeeze in some Mario Odyssey before bed though. How GOOD is that game? Like, for real. What a triumph of design, art, and gameplay. (Oh hey, past writing Matt, future editor Matt here, we are playing you off. This isn’t about how much you love Mario, no matter how good Odyssey is)

I always sleep pretty badly before races, and this was not an exception. I was pretty tightly wound. So, when the alarm went off, I didn’t need to hit snooze. I was up. My friends, Jeff and Stacey, who are far too nice, brought me a cogurt (coconut yogurt) for a pre-race breakfast. I scarfed that down, and proceeded to get ready. I was double and triple checking that I had everything and was properly lubed up.
Ok, sidebar. If you’ve been around me you have already heard me bring this up, and I’ve chosen to become an evangelist with regards to this. Fellas, tape your nips. Anyone who runs long distances wrestles with chaffing; it just comes with the territory. Inevitably, every long-distance race you will see someone with bloody nips. We’ve all been there. Every stride just makes it worse. I’ve vasalined, and while that helps, after a while it soaks into the shirt and you are right back where you started. I decided to just try to avoid it all and slap an X of athletic tape over those bad boys. WORLD. OF. DIFFERENCE. I will not be turning back. I came away from the marathon with zero nipple related injuries. Pride goeth before the fall. Don’t let that be you. TAPE ‘EM UP! P.S.A. over.

I was ready, and vibrating internally. I wanted to start. We got to the race right on time, which was nice. There was not the usual waiting for hours that usually happens. My internal goal was just to keep a steady pace. Don’t worry about time (one caveat was that I need to be under 5 hours). Don’t try to beat last years’ time. With that in mind, I just ran. I pretty much blocked out everyone around me and focused. I was feeling good, but I always feel really good for at least the first 10 miles. I was feeling really good though. The weather was cooperating, for the most part. I had downloaded a new audiobook about game dev (watch out fellow youths, very too cool guy alert) called “Blood, Sweat, and Pixels” that had received positive reviews. Things were falling into place. I had packed my own GU gels, too. I had never done that in a race before. I usually relied on the race stations to provide them. I tried to space them out. I thought every 7 miles I’d eat one. I stuck too that, too, as much as they tasted terrible (tri-berry, more like try and bury the taste. THIS GUY IS A JOKE MACHINE.). In addition to spacing out my water intake, I also didn’t drink any Gatorade they offered. In the past, I had alternated between water and Gatorade. I think this helped, because I always got thirstier after the Gatorade. There is probably no scientific merit to this claim. My guess is superstition.

As I hit the half-way mark, my legs definitely were sore, but they were holding steady. There was a moment, where I realized, that aside from one bathroom break (which took way too long thanks to an absurd line) I had only slowed down to drink water, but never stopped to walk or catch my breath. That had never happened in any of the past marathons. I’d run almost all of them, but I would stop to walk a few times. Each race I tend to come up with some mantra, and this one became “Don’t stop running.”
In addition to mantras, I tend to also partition my races. I do it as the race progresses, but it helps to have mini-goals. Like with any big problem, it’s nice to break it down into more manageable pieces. A marathon is just as much of a mental as a physical hurdle.

These are the mind games I play:

So, I was around mile 18 and it really clicked. Mile 18 is usually when the reality of the situation makes itself known. You just ran 18 miles and you still have to run 8 more. It’s been an overwhelming feeling in the past. The place where the feelings of, “Why on Earth did I do this?” set in. The surprise this time was that at mile 18, I was Gucci. I wasn’t seeing red, all signs pointed smooth sailing ahead.

If we follow my mental map, next up was 20. It came and went; the usual signs of wear were nowhere to be found. Mile 21, 22, 23 passed without much fanfare. I felt the vibrations on my watch, but held firm. Before I had even realized I was at mile 25 and ready to leave it on the field. I booked it (as much book as my legs had left) and just like that I had crossed the finish. 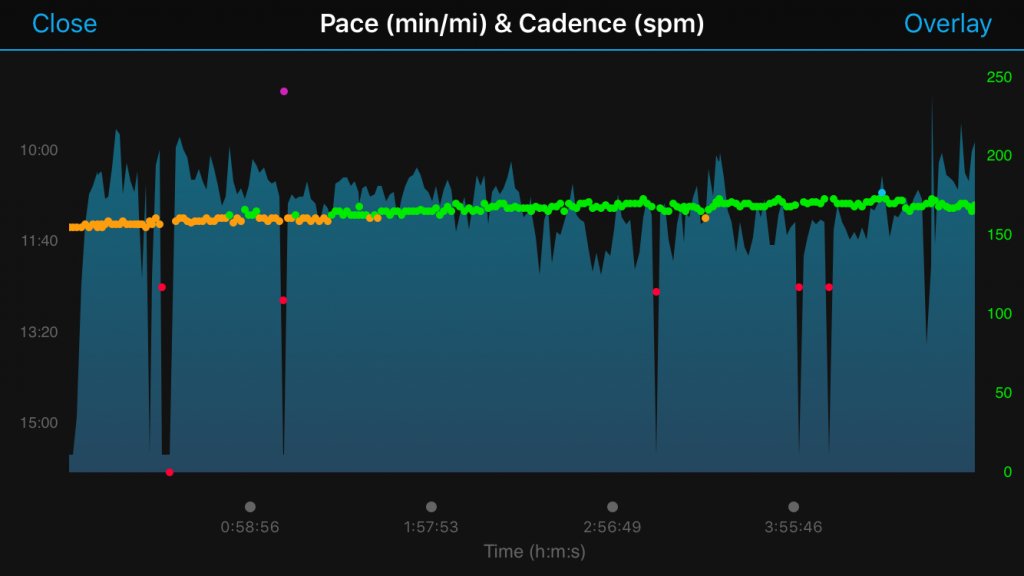 I was no doubt tired and sore, but I just ran an entire marathon without stopping. The one word that came to my head after I finished was how smooth the race felt. It was like going on a long run around town.
To say I was satisfied with the results is an understatement. I was and am ecstatic. I did not beat my time from the previous year, but I felt far more confident coming off this race than any previous. Maybe I got lucky. We all have good days and bad. Maybe the cross-training was paying off. All I know is that I came off this race immediately wanting to do more, and to perform better. One of my goals next year is to work on speed training. I’ve never done it before, I’ve focused solely on distance, but that seems like the next logical step. 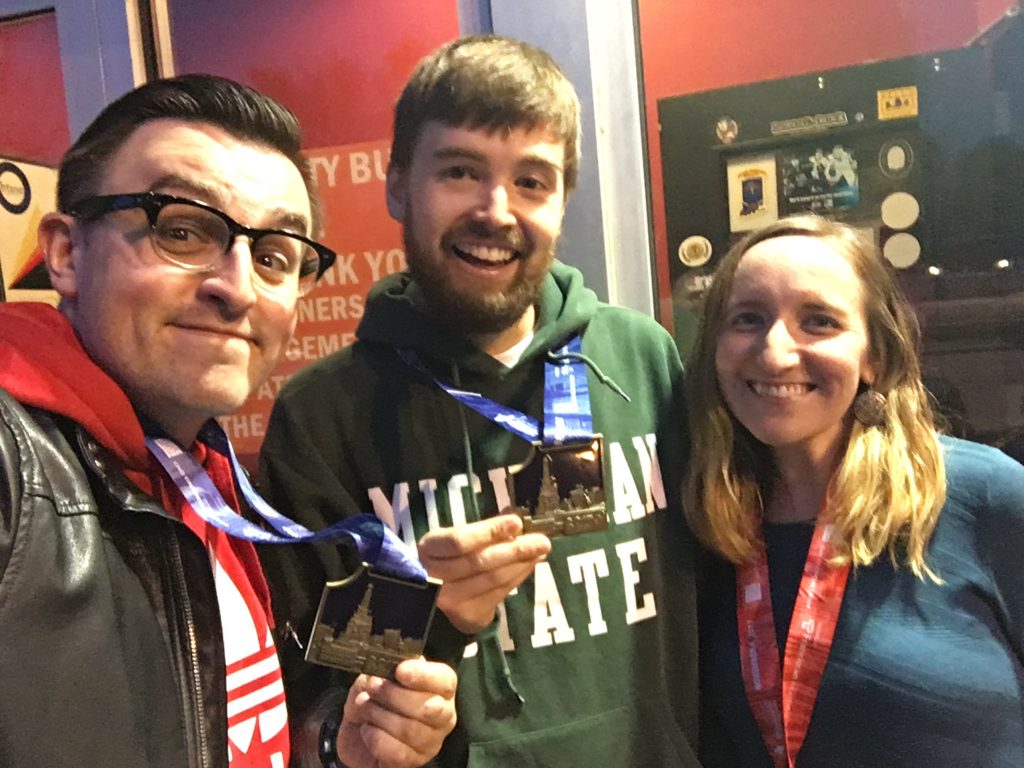 I want to take this moment to thank and congratulate my super buds, Jeff and Stacey. Not only have they been super supportive throughout the year, but they were the best companions to have around for the race. It was Jeff’s first marathon, and Stacey’s first half-marathon. They both finished strong, and I couldn’t be prouder of them both. They also just made for a crazy fun, and memorable weekend, even if we were limping around for the rest of Saturday and Sunday.

So, after my last post, how is my overall feeling of shame and disappointment? It’s pretty much vanished. I am still disappointed with how Chicago turned out, but it’s a muted disappointment. My process of using failure as a motivator seems to have helped again. I know there will be a time where this won’t work anymore and I’m not looking forward to it.

I was hoping to increase my marathon number to 5 by years’ end, but I can live with 4, especially if it’s a solid 4. I already applied to Chicago for next year, and signed up for one last half for the year in December.