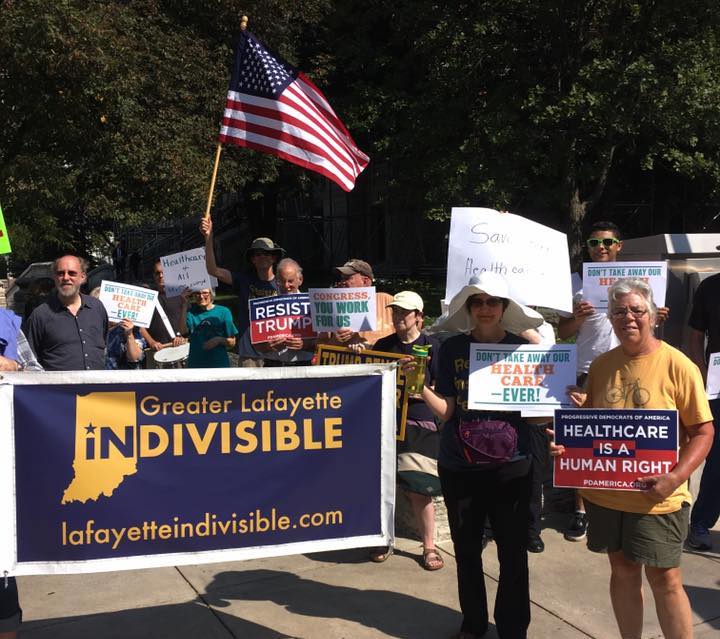 “Well, Doctor, what have we got—a Republic or a Monarchy?”

This quote is attributed to Benjamin Franklin — who knows if it’s apocryphal or not. I never gave it much thought until recently. Someone gave it as a toast at a cook-out I was at recently and it kind of stuck a chord.

Here’s the thing, this past year, I’ve become a little political. OK, OK, a lot political. I never really intended to, but my conscience kind of thrust it upon me. The 2016 election had a profound effect on me, in ways I didn’t fully anticipate. After everything, the vitriol, the sexual harassment tape, the racial dog whistles, the lack of constitutional and governmental experience and knowledge, after all that he still won. I suppose I was naïve in thinking that there wasn’t a contingent of people who would ignore all that and still pull the lever for him. I never believed there was 0% chance he could be elected, but I still thought we’d all come through and keep this man out of the oval. Well, dear reader, I’m not sure if you have been around the last 10 months, but indeed that is not the case.

The day after Donald Trump was proclaimed victor, I felt sick. I’m sure many of you can commiserate. But beyond the physiological manifestations, I felt powerless. Powerless to affect the future. In my life, I’ve felt existential dread about what comes next. I had real trouble with college, and there were times when I felt the walls closing in on me with what my future would look like. I still have dreams where I am told I didn’t have the requisite classes and credits to graduate and they rescind my diploma. These, however, were circumstances of my own making. Those outcomes were about me not spending enough time focusing on school work. This, this was a different feeling. This felt like I didn’t have a positive future, and there wasn’t anything I could do about it. There was no strict schedule to which I could adhere, or amount of time I could spend in an isolated corner of a library that would affect the outcomes.

For weeks afterward, I put myself on total media blackout, social or otherwise, because I was, frankly, scared of what I’d read. Those weeks were hazy. This is quite hackneyed, but while nothing had really changed, everything seemed different.

The media blackout only lasted so long, and the pendulum swung the other way. I became glued to the news. I remember I would feverishly refresh the Washington Post, New York Times, and CNN websites for any news that came out. It was destructive. I knew it was destructive, and I knew I couldn’t stop. The more I read the same reports regurgitated five different ways, the more frenzied I would become. I know my friends and family noticed.

There was a day that switched perspective for me though. I remember it because it was just a great day. One of those days that stick in your mind. I mentally told myself to take a note, try to store it away for days to follow.
It was a confluence of several awesome things. My friend Katie wanted to film a movie for her husband’s birthday present, a parody of the Drunk History series, but applied to the life of her husband, Joe. She asked for my help and I agreed. I love making movies. It goes back to my high school days. There is something about the process that just hits me in all the right places. Maybe it’s the goofing around with friends in front of a camera, maybe it’s turning the chaos of the raw footage and forging it into something cohesive. I’m sure it’s all of it, but before I go off and wax nostalgic about my high school movie days, let’s get back to the focus of this post. On top of filming, that day also happened to have unseasonably warm weather. Here is the kicker, and really what matters in the context of this post, that day was the Women’s March. I saw all these women, all these people, come out in droves to protest. I saw local protestors gathering, I saw the aerial shots on Twitter and Facebook. It was just this crazy force. The march wasn’t specifically about the current administration, there was, however, some focus on it. It was really a sight to witness. I remember feeling something I hadn’t before, a sense of comradery; maybe we could really do something about this mess.

We grow up being taught history about the hows and whys of collapsing societies. We learn about the burning of Rome and the rise of Nazi Germany. We are taught this, ostensibly, so we can learn the lessons, and not repeat the mistakes of our ancestors. Our film, television, and comic book heroes are all imbued with a sense of doing what’s right despite its unpopularity. Heck, even many religions have core tenants that teach these morals. Despite all this though, it’s hard to recognize when these apply and even harder to act. Well, the people that marched that day showed me I needed to act.

The next step however was how, exactly, to act. I had no clue. I started thinking what I could do alone, came up with some ideas, and even consulted with some of my more politically savvy friends. I quickly came to the conclusion that doing this alone was, frankly, arrogant, and not going to work. I did see some murmurings of a Science March that might be being organized in DC. Being a man of science and having been inspired by a march, well it was a match made in heaven. I was going to go to DC and march. Once the details got hammered out, I got my friend Jeff in on it, and we would be on our way to DC on Earth day. This was my first toe dip into the world of activism. I was jazzed. 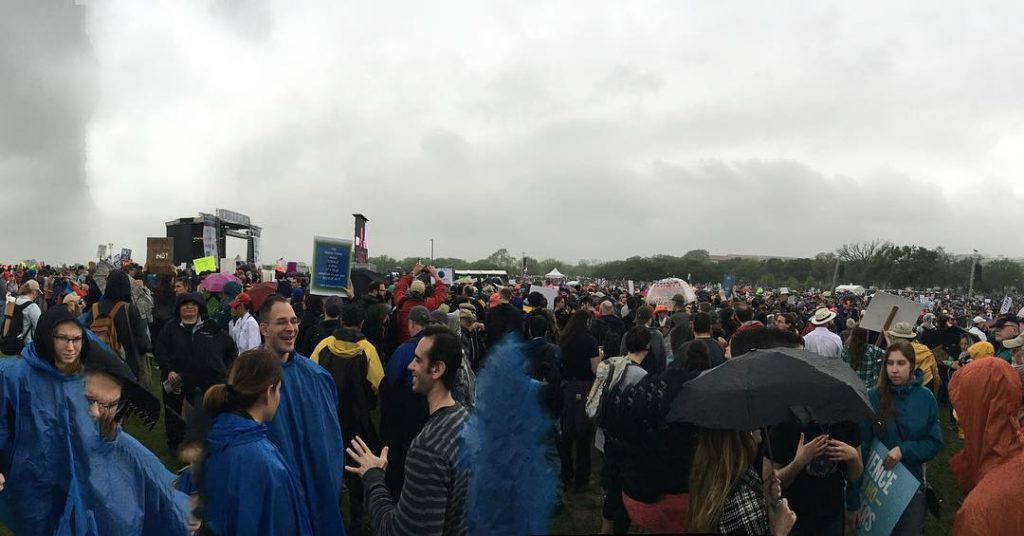 I was sitting here with this new energy, and a little courage, and nothing to do with it. I started looking around for local groups doing stuff. There were a few groups that popped up in my research. I saw the ACLU doing a lot, at least on social media. Raising funds, and fighting some of the policies already being implemented by the Trump Administration. They had an event to kick off their People Power campaign. I signed up to go, but I waffled about it quite a bit. I knew no one going, wasn’t sure what to expect, and was pretty anxious about the whole ordeal. I did finally decide to go, and it while the event wasn’t much more than a live stream and a little more information about the ACLU, it was great to see these other people there. People who never really had done political stuff before, but felt compelled to seek it out under the circumstances.

The other group that came on my radar was something called Indivisible. It wasn’t really a group at the time, it was just this guide. It was written by ex-congressional staffers for ways to contact and pressure your representative to, you know, represent you. This being another way to say, do their jobs. It was practical advice; actionable items, instead of aspirational thoughts. I had joined the local Indivisible group on Facebook, which I found through the national organization’s website. There happened to be a meeting the next day and having survived the ACLU encounter, I decided to attend.

That was the second turning point. It wasn’t a lot of people, but it was more than I had envisioned. It was really a bunch of serving tables in an empty room in a library, but it was the people that made it. People who came from various backgrounds, and age ranges. These were people who didn’t like what was going on and wanted to do something about it. It was awesome. I found it. I found the group I was looking for.

Honestly, things kind of snowballed from there. It’s hard to say when things really took off, because in a lot of ways it still feels like we are getting our stuff together, but we have all come so far from that room I first attended a meeting in. 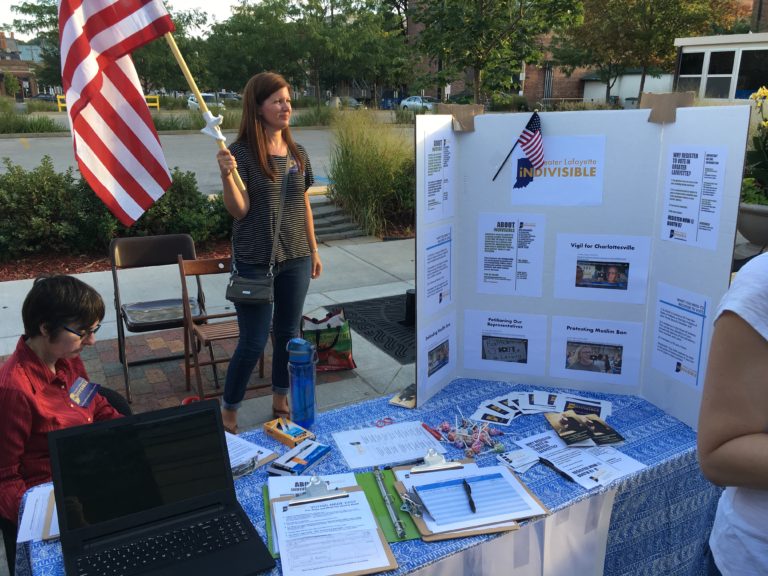 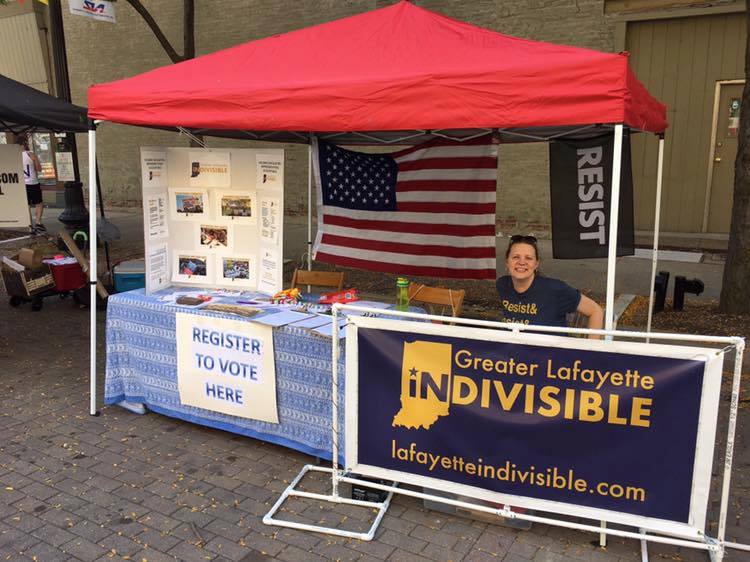 Personally, I’ve learned so much about local politics, government, and just how much people actually do influence these. I hope to learn much more going forward.

To see how much people do care, is truly inspiring. People who take time out of their already busy lives to contribute to a better country, a better society, and a better world. It is what gives me hope. 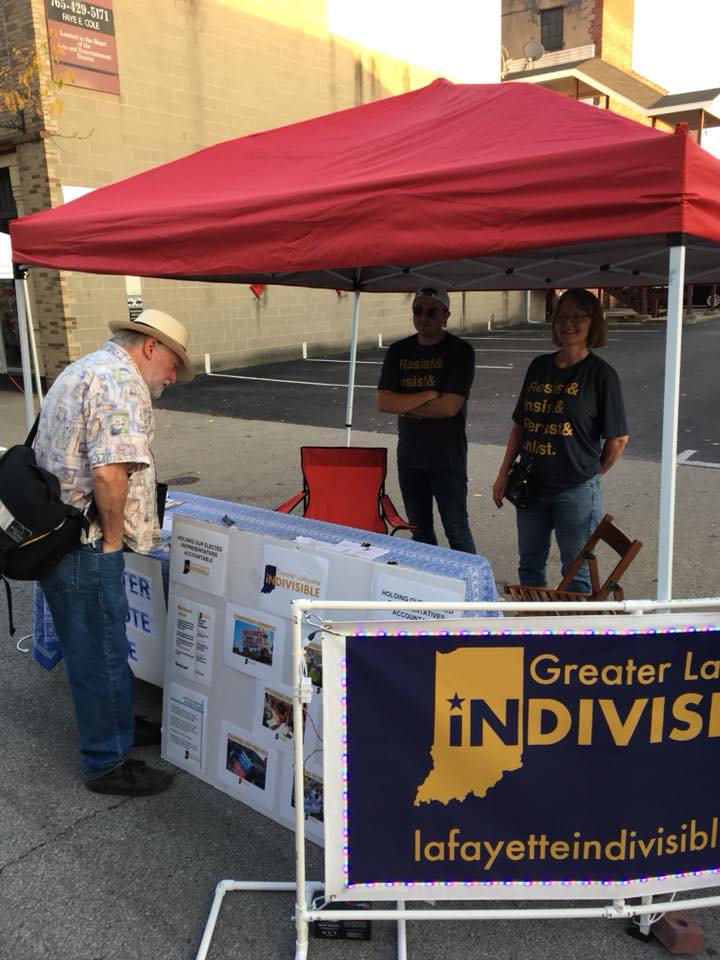 I’ve glossed over a lot of the details the formation of what is now Greater Lafayette Indivisible because that story is still being told. I hope I can come back later and fill in the rest of the tale.

I said earlier that after the election I felt powerless, that I felt like I didn’t have any control over what would happen next. Greater Lafayette Indivisible has given me back a sense of control over that. For that I will be forever grateful. I can’t predict the future, and it might all be for naught, but it’s hard to see that happening seeing the dedication of the people around me.

I started with a quote so I’ll exit with one, too.

“The only thing necessary for the triumph of evil is for good men to do nothing.” ― Edmund Burke