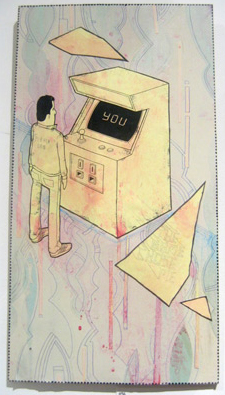 I’ve been getting into podcasts hard these past 6 months. I have been doing quite a bit of long distance driving recently and podcasts have been a savior during the boredom of I-65. One of the shows that brought me to this post was called “A Life Well Wasted.” It’s about video games, but almost tangentially. If any of you out there are NPR or This American Life fans it’s done in a style closely resembling that. It is more about stories people have about games or related to games and less about the games themselves. As the shows tagline says, “An Internet radio show about video games and the people who love them.” More an emphasis on the people.

The topic of one of the shows was “Why do you game?”. It seems like a harmless and easy enough question, but it’s really quite loaded. It’s hard to actually put into words why you like something. Example: “Why do you like Chocolate?” (provided you do). Aside from “‘Cuz it tastes good!” you really have to put some thought into it.

I was actually surprised at some of the answers. I guess I just never thought to step back and examine why other people indulge in this activity. To my dismay probably 3/4 of the answers given were about escaping reality and how it helps people forget about there own lives. That is not exactly the answer I was expecting. While this post is mostly about my own views on the topic I just thought that it was pretty alarming to hear that my fellow gaming brethren(and sistren) are enjoying one of my favorite pastimes purely as an alternative to alcohol.

Unless you game yourself the appeal is kind of hard to see. To me the closest cousin to games is books. While video games are primarily a visual medium (hell, video is right in it’s name) they have the ability to tell complex stories with morals and deep characterization. Also, like books, video games can be poor, audience-pleasing releases. I don’t want to debate it in this specific post, but I do consider video games, like books to be a form of art.

I have spent a good portion of my life playing them so I better have a pretty good reason for playing them! With that statement I begin my explanation of why I game. Gaming is myriad things to me. It’s been a starter and bonder of friendships, an exploration into human motions, a stress reliever, and a friend to lean on when you are having just the worst kind of day. While I don’t play video games as a form of escapism, I do enjoy the worlds they take you off to. Just like reading a fantastic novel, you often get whisked away to impossible places with a cast of characters you soon won’t forget. RPG’s are really fantastic about bringing emotion to the forefront of the game. People of my generation seem to be deeply impacted by Final Fantasy VII not because the gameplay was stellar (it wasn’t in hindsight), but by the story and characters. Who didn’t feel it when Aeris died? Video games have a way of making you feel apart of story like no other medium has done for me. You directly influence how the story plays out (to an extent).

Story is not the only driving factor to why I game though, as stated above. The social aspect of gaming has been around longer than the advent of large single player adventures. Competing whether on a team of by yourself is so gratifying. That one kill to win the match. The power up that jettisons you to victory. The overall feeling of dominating your opponent is fantastic. I could go on and on about multiplayer gaming, but instead of recounting memories to you I will simply say that it is one of the better ways to spend a night.

I know it might sound kind of pathetic, but gaming has been there like very few things have. Whenever I am stressed or just have a “case of the Mondays” I know that I can pop in Halo, Mario, Street Fighter, or Zelda and have a smile on my face. Some people have books, movies, or music, but If I had to pick one thing that has impacted my life in a significant way it would be gaming.

While I could talk about this topic for far longer than anyone cares to hear, that is why I game. If there is any gamers out there who are reading this, why do you game? I’d love to hear why. Just drop a comment.

One reply on “On Gaming.”

I enjoyed reading this. I also listen to a lot of podcasts and I think I’ll check out the video game podcast you mentioned 🙂 Thank you for sharing.