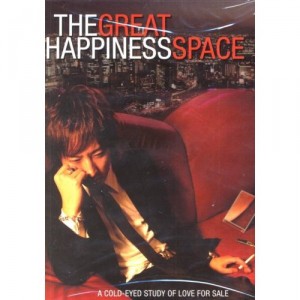 I heard about this film called The Great Happiness Space from a blog I follow and was intrigued by the concept. It was a documentary on the “host clubs” that litter parts of Japan. The concept of these are that women come in an pay for time with a host of their choice. The ultimate goal of these places is not to provide sex, but to provide companionship. For reference the female reverse exists as well. It might seem a little strange here, on the other side of the planet, to pay just to hang out with someone. That’s not to say that nothing more ever happens, it’s just not the service that is advertised. Anyway a history lesson on host clubs is not the focus of this post, nor the documentary; a little background was needed though.

The documentary is kind of a taxi cab confessions of one of the clubs in Osaka called Rakkyo . The spotlight is usually shined upon the clubs owner Issei. The sheer dichotomy of this man’s personality is beyond mind boggling. The rest of the time is split between many of the club’s frequenters. They try the best they can to explain their justifications for spending almost all their free time within the establishment.

I really had no idea what I was stepping into when I started watching. I didn’t read a whole lot about it and hadn’t heard of it until about a week ago. The synopsis was fairly vague, just a general outline really. What was supposed to be a documentary on host clubs turned out to be more focused upon human frailty and the constant need for validation. It’s really a sobering film.

I found myself at many junctures with my jaw open at the absurdity of some of the amounts of money that were thrown around. Some hosts would make upwards of $50,000 per month! When interviewing some girls about how much they would spend there it averaged about $1000 per night with some girls going up to $5000 in one evening! The most amazing thing is that no one throwing these numbers around did so with any thought or even shame for wasting all that money.

The documentary starts to pull away from the pack when the girls and the hosts start talking about what they are actually selling/buying. The hosts openly admit that they are selling dreams, fake love. They lie to these girls faces and tell them exactly what they want to hear. Many of them say they have so many clients that people become easy to read and they can shape and mold their personality to fit the person’s needs. They often times get girls who fall in love with them, even propose at times. That’s what keeps them coming back. They fall helplessly in love and try ensnare the hosts as their own. The hosts go on to explain some strategies for getting out of talks like that and to give them hope so they come back. That all sounds pretty terrible, extremely terrible really. The hosts should be run out of town for what they are peddling! But wait, what do the girls think?

The clients, when interviewed, seemed to be pretty aware of the situation. They are in love with guys who are paid to take them to an imaginary world. They still fool themselves into thinking that something may happen down the line. The real kicker comes when you find out how they finance their extravagant expenditures. I won’t tell you that, but I am sure you can guess. It really turns into a vicious cycle.

As sorry as I felt for these people watching it, the theory of the whole thing is extremely easy to relate to. People are not made to be completely independent, we are social creatures and require interaction. We all need to be validated now and again. The problem is that the host clubs only provide a temporary relief from that feeling; it’s only a band-aid on the underlying problem. Watching it you could tell that everyone at the clubs were wearing masks; alone in the crowd.

As depressing as it was, it was enlightening and at the very least entertaining. Go pick it up!