Full disclosure, I have spent entirely too much time on these videos. It could be argued that this was a learning experience, and I did learn a lot, but I still poured time I could have been using to better benefit humanity in some way. Alas, ancient Star Wars fan films are what took my attention this go-round.

When I wrote the description of the uploads I said, “I have no strong connection beyond nostalgia to these films, but they are still enjoyable.” Which is what this originally was, a throw-away lark.

The film, PA Wars, is a goofy story about a PA (production assistant) for a video production company. PAs are generally the lowest on the totem pole and are the people fetching lattes and dry cleaning. Being fed up with his station he retaliates against the “emperor”. It’s filled with goofy humor, movie references, and cheesy one-liners. The perfect fan film.

Upon re-watching (and re-watching again thanks to a painful editing process – more on that later) it triggered why I loved it so much when I was a kid, and how it informed my later decisions with video.

The film does a great job capturing the zeitgeist of the late 90s. Any dork, and plenty non-dorks, had Star Wars on the tip of their tongues. A new one was being made! It had been so long since the last one made its indelible mark on pop culture. This was a big deal. I remember impatiently waiting on any information to come out about the movie. There were also countless product tie-ins everywhere. This included the iconic collector cups from Taco Bell and plastic light sabers – who didn’t own three of those (or five depending on if you were me in 1998)?

This smashed directly into the dot-com boom. The internet was totally happening. Guys, the future, it was here. This meant a lot of Star Wars fan sites were popping up (wanna join my web ring?).

I’d like to include another advent taking place at this time. Digital video. Not just DVDs, but the ability to edit your own personal videos on a computer. This was all without costly setups. Even tough the Video Toaster was available for your Commodore Amiga (yeah, I didn’t have one either) home video production was mainstream now. Yeah, people will give me crap, but I largely attribute this to Apple. They were all about the iMac being your “digital hub” and this included video. All you needed was a DV camera, Final Cut Pro or iMovie, and a dream. Before the days of YouTube they were one of the major standards for internet video – Quicktime .mov files with resolutions the size of a postage stamp.

What I’m saying is this all collided with a bevy of Star Wars fan films. People were desperate for new Star Wars so these fan films, including this one, filled a void while waiting for the new film.

I went searching for PA Wars a while back because it popped into my head, and all I could find was the second part of the film. I thought it was just lost in the history of the internet. Well, when I was going through some old VHS tapes to convert to digital I happened upon one that said “Star Wars Fan Films”. Evidently, I found these films so hilarious I recorded them off of my computer onto a VHS tape to show to friends. Those .mov files were too big to transfer on a floppy, so VHS was a natural next step. Here is a picture of the original capture. 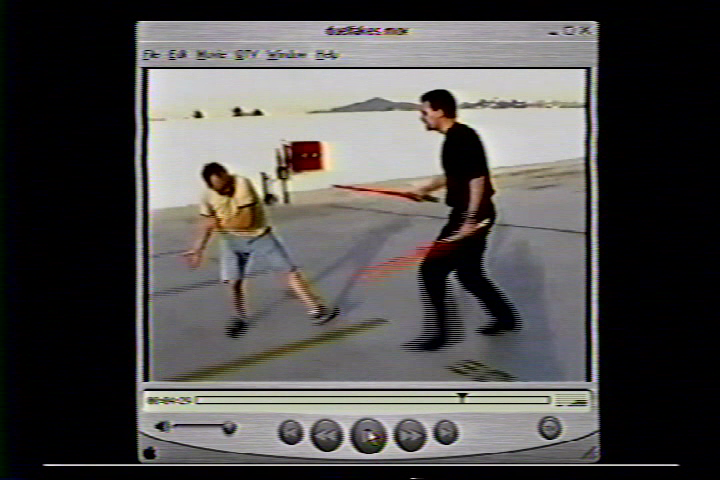 Yeah I didn’t even make it full screen, you can still see the Quicktime player. The important thing is, I had it still! Thanks, young Matt.

It was in pretty poor shape in terms of quality. Clearly, I needed to fix it to the best of my ability. First step was to de-interlaced it. I ended up finding a process outside of Premiere Pro because Premiere is not good at it from my experience. I used a program called VirtualDub. I took the de-interlaced footage, scaled, cropped, color and level corrected then encoded it for YouTube. I tried to mess with the audio only in Premiere and originally thought it was good enough. Then after uploading and encoding (which took hours even with GPU acceleration) it kept bugging me. It had a persistent hum and was really quiet despite me boosting the volume. From experience with Tim and Matt play I picked up some skills for cleaning up audio in Audacity. So, I extracted the audio and removed the noise, normalized, compressed, and then ran it though a low-pass filter because some of the quieter dialog had a loud, high-frequency pop to it. Added it back and re-encoded it and re-uploaded it.

I did a search one more time to see if the original PA wars files were online. I found the special edition ones on Daily Motion. So, I grabbed those, scaled them, put the two parts together and uploaded them to YouTube.

This should be self-evident, but I am a huge dork, and a little bit of a perfectionist.

So, here are the fruits of my labor. Posted for the world.

To end on a bit of a personal note. This film was one of the reasons I wanted to make videos. It seemed so fun (it is by the way). I even kind of stole a scene of there’s and put it in a movie I made in high school. The Stayin’ Alive walk intro. I did it in my Dracula movie for English class.

So, in closing, Matt had a past. This was part of it.