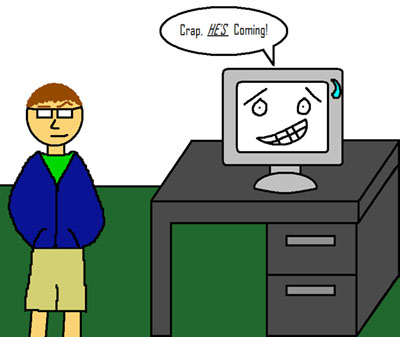 For today’s post I have included a illustration drawn in MSPaint by yours truly. Now to explain the story behind it. For those of you who don’t know, my occupation for the time being is a network administrator/computer tech guy for a small publishing company. Here’s a side story before I delve into the actual story. I’m sure that that job title sounds unfitting for an 18 year old. Well, the other day I went into the optometrist office to get my eyes checked out because I needed new glasses. Since I was a walk in patient I needed to fill out some paperwork. It was the normal name, address, phone, etc. They had a place for occupation so I filled it in with exactly what I just said my job was, network administrator. So, they sat me down in the chair with those huge super glasses with a million changeable lenses and the doctor walks in and starts with the normal small talk. He stops for a second and says well before we continue we will have to change some things on your paperwork. I wonder what it could be seeing that I am confident I know my name, address, and age. He has the nerve to say, “OK, for occupation you have network administrator, that’s your dad, not you.” What the hell? Why can’t I be one. So, I smugly told him, “No that’s me.” He was stunned and responded with, “O-ooo-oh that’s all then.” Jerk, showed him who’s boss. I always contend with my age and my computer knowledge. It pisses me off. I go to work on people’s computers, I get there they think I know nothing. I fix their computer and they are all stunned and always, always say “I didn’t think you could do that.” Geeze, don’t have too much faith in me.

OK, no that I have got sufficiently off track, let me get back to what I originally was talking about. So, my job basically consists of fixing computers for this company. I always get people asking me to fix their computers. There is this phenomenon that happens almost 96.496% of the time. I walk up to the computer and magically as if I had super powers it works. I don’t even have to touch the computer I just have to be near it. I was pondering over my new found super powers today when I realized that it’s probably not me with super powers. I just intimidate the computers. I know what you’re thinking, you can’t intimidate and inanimate object. I think you can! Peoples faces when I come by to fix their computer and somehow it miraculously works by just me standing near is proof. So, let this be a warning to all you troublesome computers out there. I’m comin’ for ya.