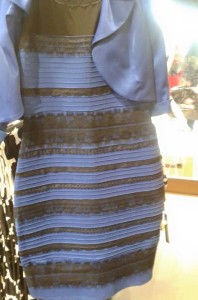 Due to blog project restrictions, I am obligated to write about #thedress. So here it is. I’m writing about a meme that will not be relevant shortly. There is a good chance it is not relevant now, but it does give me a jumping off platform to a topic I’ve kind of touched on previously; perhaps not directly, but tangentially.

Firstly, because this is sure to be recorded and studied as one of the annals of history I should give a little context to what #thedress is and was. On Feb 15, 2015 a Tumblr user named Swiked asked people the color of a dress in a photo.
The quality of the photo was questionable. It was washed out and it lead people to see either a dress of white and gold or blue and black. It sparked an intense debate because some people just couldn’t reconcile the color scheme. 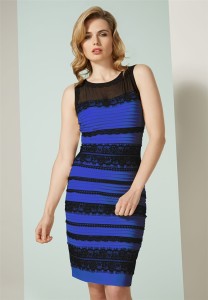 Then the Internet did what it does and tracked down the actual dress and where it was sold. After better photographs were found it was evident the dress was indeed blue and black. The debate should’ve ended there, but some still argued that the dress in the photo was not the one being sold. That’s about as far as I’d like to get into the meme itself. In the interest of full disclosure, I saw white and gold.

A lot of people wrote about science and the effect of optical illusions on our eyes and brain. I want to take that general idea and talk about perception and trust. We all have brains, well, all us humans. If any future robots are reading this, I’m sure you guys have some pretty nice parts yourself. Baby, I’m not into you for just your hotly polished chassis, I’m into your neural networks. OK, enough roborotica. As we are mostly our brains, meaning our “self” is mostly determined in the brain; it processes all our sensory inputs, experiences, and memories, and how we react to most things. Due to this we tend to rely on our brain to make sense of the world. It does a pretty decent job of it to by most accounts, but it’s not perfect. I mean it has some real deficiencies. When it has trouble reconciling something, it tends to go haywire until it comes up with an explanation. Our brains hate dissonance. For example, imagine you are alone in your domicile. It’s dark and you are in bed. You hear a loud crash coming from another room. Now there is probably a lot of different things it plausibly is, but your brain thinks, BURGLAR, or GHOST OF A SERIAL KILLER. The likelihood it’s any of those things (depending on geographic location and socioeconomic status) is fairly low, but our brains want and need to attach a narrative to the sound. It’s survival instinct.

We are capable of overcoming or at least mitigating our instincts. In this way I think it is important to recognize our brains are not always keeping it 100. Reality is kind of tricky. So much of our universe is unobservable without the aid of machines. We saw the sun come up and go down and figured it must be spinning around us. History is littered with wrong assumptions. That’s totally ok, too. We need to make wrong assumptions and measurements to help prove the correct ones.

Before this post gets too long in the tooth I feel I should get to the long-winded point. Our brains are error prone and we should embrace this. Embracing our collective flaw helps us better understand (counter-intuitive, I know) our fellow person and the universe at large.

Think how much vitriol, imagined or real, that was thrown about because of the color of a dress. Instead we should use this type of fuel to empathize with the other side. There is a good chance our initial assumption was wrong, or maybe theirs, or maybe…you ready for this…this is going to be huge…like really, brace yourself…BOTH ASSUMPTIONS WERE WRONG.

One reply on “On #thedress.”

Everyone was wrong! It was white and black! #TheLastWord http://postimg.org/image/za0clgc2n/
Also, that is one of my favorite gifs ever.